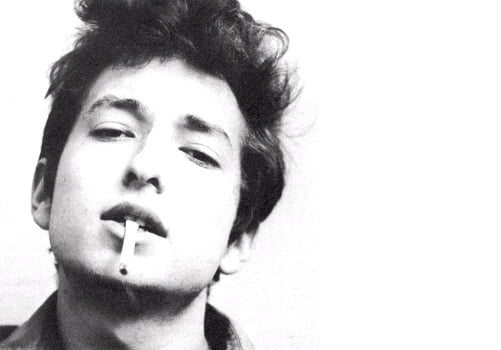 Happy Birthday to Bob Dylan, the Sexiest Man in the Universe

the drunken politician leaps
upon the street where mothers weep
and the saviors who are fast asleep, they wait for you
and i wait for them to interrupt
me drinkin’ from my broken cup
and ask me to
open up the gate for you

how all my fathers, they’ve gone down
true love they’ve been without it
but all their daughters put me down
’cause i don’t think about it

well, i return to the queen of spades
and talk with my chambermaid
she knows that i’m not afraid to look at her
she is good to me
and there’s nothing she doesn’t see
she knows where i’d like to be
but it doesn’t matter

now your dancing child with his chinese suit
he spoke to me, i took his flute
no, i wasn’t very cute to him, was i?
but i did it, though, because he lied
because he took you for a ride
and because time was on his side
and because i . . .

It’s your gorgeous birthday next week. You’re three years younger than my father (whom I hope never reads this!). That’s a bit of a head-wrecker.

It is a fact that I wish to high heaven that my father’s father had met my mother’s whatever-it-is earlier. Then I would have been old enough to tell you all this in a more delicious setting. My beloved brother Joseph, who introduced me to you, passed an invitation to me from the Mail to write something about you because next Tuesday is your birthday.

So… Bobby, or R.J or Ray, or Anything…Here is my birthday little thing for you.

This week when everyone is writing and talking and thinking about your birthday, they’re all gonna go on about the usual stuff.

‘Voice of a generation.’

All true I’m sure… But no one ever says: ‘Holy Mother of God! That Dylan fellow is an extremely adjectival sexy adjectival m.a.n. so he is for himself!’

It’s about time all the ladies, and I mean ALL the ladies, need to tell everyone exactly where it’s at concerning the deliciousness of Robert Zimmerman.

Yes, sir! THE sexiest man that ever stalked the face of this earth.

‘Tis lucky for you, boyo, that you’re away over there in America. Sure there’s barely a woman in the universe who could keep her mitts off you! Thanks be to God that flights are not cheap here in Ireland or you’d be wise to run. And also to follow Gaddafi’s example by employing fake Bob Dylans, so no-one will know which one is actually you. Incidentally, should you decide you want to follow Gaddafi’s example by employing all-female body guards, I hope you will consider me. Please don’t ask for a reference though. I wouldn’t come up looking very good.

This means I’m not the only person on earth who thinks you’re a ride. Despite your main feature being sexeliciousness, you’re also not a bad oul’ sayer of songs. And by the way, there’s something the 13-year-old me wants to say to you: Thank you for making Christian music sexy. Poor God. Until you made Slow Train Coming, he was suicidal. From listening to terrible religious music.

I mean, have you ever seen Irish dancing? It’s the un-sexiest thing one could see. We only dance from the knee down. Keeping everything else tight as a board. Arms stiff at our sides. For fear we might slip into the world of sensuality.

People say, and I hope it’s not so, that you didn’t ‘stand by’ Slow Train Coming. I don’t know what they mean exactly. And I don’t even care. Either way you could never have known what it was like in Ireland before that album tore down the walls which separated God and sex. You couldn’t have known the effect the record would have. And that’s appropriate. Why should you know?

I was 13 the year it came out. Joe, my brother, brought it home.

But when I heard you singing those songs on Slow Train Coming, and when I saw the drawing of the train on the sleeve, I knew what I wanted to do with my life.

I saw you at Slane when I was like 16. I couldn’t believe I would actually see you in the flesh. I had a boyfriend at the time. Only reason we were together was we were both obsessed with you. Sadly we never did really anything but talk about you! Of course I could never have dreamed of telling him you were way sexier than him. Am I bad? I certainly hope so.

Santana played before you. When you came on you had on Oompa Loompa orange make-up. So it wasn’t only musically or spritually that you were ahead of your time. You foresaw fake tan! And the dreaded RTE make-up department. [C’mon, Ryan, man, let’s just come out and admit it, they’ve not been the Mae West over the years. Though I do grant you they’re not as woeful as TV3 – I’m forever tweeting Vincent Browne’s show over the make-up. They have him looking like Bob at Slane.]

I think you also had on loads of black khol eyeliner. Very strange sight. Gorgeous nonetheless, obviously. But strange.

Then I briefly actually met you twice. Backstage at two festivals, there were loads of us playing. I must have seduced your manager with sexual bribes, I can’t remember, but there I was in your dressing room. Just you and your tour manager.

You asked would I like a drink. I said yes, and though I can’t stomach alcohol I sipped away and pretended I wasn’t suppressing the desire to let you have a look at what I ate for lunch. You did a lot of pacing up and down. I remember thinking ‘Holy mother of the divine lord Krishna, who could perform after drinking this?’

The third and final time our paths crossed was on that infamous evening at your tribute concert in Madison Square Garden, an evening which heaved with consequence. In the week or so before that show I had done an incendiary acapella version of a Bob Marley (the other ‘Bob’) song called War on Saturday Night Live. I changed some words and made it about child abuse instead of racism. And at the end of the song I tore up a picture of the then Pope, JP2. No smirking please, Bob – when mentioning ‘the incident’ one must always look very serious.

Then, soon after that, I went shopping to find an outfit for your upcoming show. The decision I made was so wrong – a turquoise jacket and skirt suit which should have been worn by a very old woman…and with a hideous gold thing on the jacket. Unforgivable. I look at the footage of the show now and I am appalled. What was I thinking? Perhaps I should have slipped you a note before the show, explaining ‘the incident’ to you, but in the terror of my image in my dressing room mirror I guess I forgot.

So I walked on stage that night and half the audience cheered and the other half booed. Was it the Saturday Night Live fallout or had I just totally made the wrong wardrobe choice?

Seriously though, backstage afterwards, you looked at me confused as if to ask me what I had done to upset people so much. Instead of singing I Believe in You, as planned, I had screamed out the Bob Marley song instead. But it felt appropriate for me to scream while I had the chance. And I knew, if you understood, you wouldn’t mind that I used the stage you gave me to stand for the God you also gave me. I hope your questions from that night have since been answered for you by the various revelations concerning the spiritual condition of the catholic church. In God’s wide world. If I had simply sung I Believe in You that night my voice would have been drowned in the noise of the opposing spiritual forces in the room.

I had to do what I did in Madison Square Garden. Even if it meant being treated like a mental case for years after.

The God I believed in was the one you brought off the pages of scriptures into my life. Not the one those bored black-and-white-wearing priests droned on about whilst flicking bits of dust off their altars in the middle of the consecration of the Host.

Even if they showed me to the door. And said don’t come back no more cuz I didn’t be like they’d like me to. Even if I walked out on my own. A thousand miles from home, I didn’t feel alone. Cuz I believe in you.

Don’t let me stray too far. Keep me where you are. So I will always be renewed. And Lord, what you’ve given me today is worth more than I could pay. And no matter what they say, I believe in you…

But, I digress, Bob. I only meant to tell you you’re gorgeous. So have seventy kisses for yourself on Tuesday.

You want to keep reading, right?

Other great pieces by

On the same topic:

Warm In The Morning 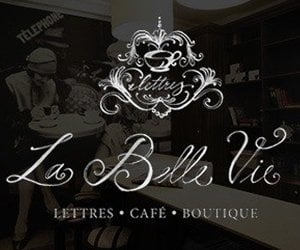